Finding the Cure on a Bike: The Ride to Conquer Cancer 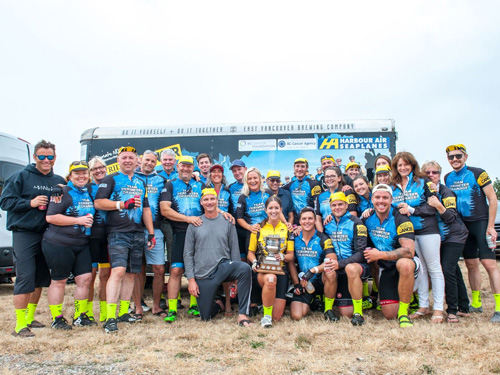 For four years now, Chris Gray has assembled a team of dedicated, passionate souls to embark on a journey to another country.

On a bike. BC’s chapter of the Ride To Conquer Cancer takes the team from Cloverdale to Seattle in the name of cancer research. Sometimes the road is flat, sometimes it’s turbulent, but it’s a road that serves as therapy for thousands of people touched by this devastating disease.

And sometimes the road is a little bit windy and rainy.

The 2016 Road to Conquer Cancer is coming up fast, so I caught up with Chris to learn more about his motivation for putting the team together. Oh, and I’m also riding now apparently.

Why did you start organizing Team Perimeter for the Ride to Conquer Cancer?

Cancer touches everyone, it doesn’t who you are or what you do, everyone has lost someone to this disease. I originally started because my brother and sister were doing the ride and I was donating to them.

Then, an acquaintance of mine, a friend of a friend, lost a son. I saw the devastation firsthand. I wanted to do something more than just donate so I started putting a team together to raise some money and it took off.

Friends, family, buddies from the North Shore Winter Club – I got 20 people on board and we raised $100,000. People on the team, they take it quite seriously. Sheldon Scott has won twice in three years, he works so hard and believes in the cause.

Is it hard to get people on board? It’s a little nerve-wracking, I don’t want to pass out on the side of the road.

It’s funny, lots of people say that, but they just need a reason to start training. My friend Joe Campbell started training for the ride and now he’s a machine. This year we’ve recruited Bryant Magee, Dan Pouliot, and Jody Landon. I usually buy the bike for them to train and they give it back afterwards. Danny Payne is riding with his daughter. Steve Jennings is riding, we’re having a fundraiser at Steve’s pub, The Narrows on the North Shore.

(June 25th at the Narrows, to be exact -Kelvin)

It’s fun to get the competitive juices flowing, but the reality is that once you start training or the ride itself, you’re reminded of the real pain that sufferers go through, and all of a sudden it doesn’t seem so bad. I have a natural ability to rally people…

Yeah I can tell.

(Laughs) It’s a life-changing experience. Some people do it so they can cross it off their bucket list. Some do it because they’ve been affected. I was wavering about doing it this year, but I sent out one blast and got $1500 and that’s without strong-arming people. My goal is to raise a million dollars. Well be close to $400,000 after this year.

(Team Perimeter has raised over $280,000 for the Ride to Conquer Cancer. -Kelvin)

It’s an amazing two days. You’re up early Saturday morning, ride to Mount Vernon in Washington. The complete race is Cloverdale to Bellevue. When we arrive in Bellevue there’s five thousand people waiting, it’s incredible seeing those people at the finish line.

Last year was the most difficult two days of my life. The ride on the Saturday, we had 100 km/hr wins. 2100 people started, 182 finished. 20 out of 21 Team Perimeter members finished. Mentally, emotionally – it would have been easy to give up, but you look at what people go through. People are in pain, real pain, dealing with their disease; me riding through these winds and it taking seven or eight hours when it should take four, you have to remind yourself why you do it. Who you do it for. People broke down when they finished. If these people have to go through a life or death situation then I can ride in this weather.

And you were telling me earlier that it’s affected your family recently.

My aunt in Germany died last year, so it’s never been more real for me. Most of the time it’s just been as a witness to the devastation of others. I don’t know if the ride helped us when we went through it – it’s obviously never easy, but I feel better about the effort I’ve put into the Ride To Conquer Cancer.

You meet a lot of good people on the ride. When you stop after the first day, you meet people, tell stories, eat and drink a bit. The team bonding is unreal. Most people camp, we’re soft, we go to a hotel in Arlington. We have a lot of support. We have a massage therapist this year, we have a trailer with everything we need, and we sell some advertising too. It’s a big job, but it raises a lot of money and increases awareness.

Plus it’s therapeutic for a lot of people. It’s been created to help research, but just expending the energy to do it, it’s helped a lot of people cope with their own loss.