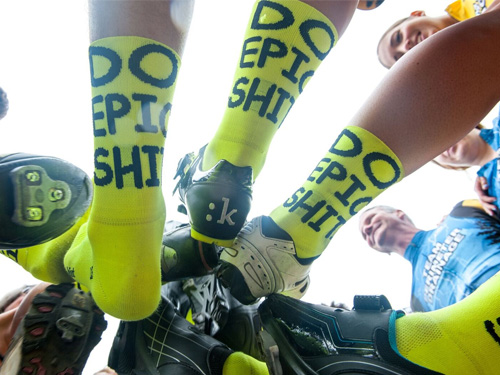 Bryant Magee is the newest recruit on Team Perimeter’s quest to conquer cancer. The Ride To Conquer Cancer in BC has raised $8.4 Million on the backs (and butts) of 2,087 riders following 2015’s event.

And Bryant is more than willing to donate his sensitive posterior to the cause.

Kelvin: How did you get convinced to join the team?

Bryant: It was pretty organic, as these kinds of things usually are. It all started at the Cure concert a couple weeks back. A bunch of us were standing around and hanging out and Chris mentioned the ride. Before you know it all of us were signed up. It’s a fantastic cause. Chris is well set up, he has all the support to get riders in and support them during the race. He provided me with a road bike to train, I don’t normally ride, so that was a big part of it. Just a small piece of the puzzle, but the result will be a lot of money raised. Plus this is better than the old 70’s bike with the streamers I have in my garage.

In addition to helping the team, who will you be riding for?

I’m going to be riding for my brother. He was recently diagnosed with a rare form of cancer earlier this year. Everyone has been impacted but once it hits home people really feel the urge to get off their butt to make a difference. That’s my motivation. If he can go through this and have good days and bad days there’s no reason I can’t get on a bike and ride for 250 km’s.

You’re in decent shape now, you should be fine, right?

(Laughs) I’m ok. Everyone thinks they’re in good shape until they switch to a new sport. There’s a demand on the body on the bike. If you’re reasonably fit, you should be fine, plus there’s good support for our team. Really though, it’s a good reason to get out and cycle around town.

Most of the team’s members know each other. Is there a uniting factor through all of this.

You bet, it’s a community effort. We have great relationships and friendships that most of us began at the North Shore Winter Club. I met Chris through hockey. We’re such a close knit family, once one jumps on board the others follow, so it’s pretty easy to recruit. People cycle through, pardon the pun, the team every couple of years, so there’s a good balance with the recruitment, whether it’s Chris’ company folks and then people in the hockey universe. You want to be surrounded by people you like being around and you certainly don’t want to  be the one guy who doesn’t do it. So there’s some friendly peer pressure.

This is your first race, what have you been told to expect?

Just speaking with Chris’ team members on how it went the last few years – I know there will be good support for the riders, there’s a trailer and a crew that follows along and makes sure you’ve got everything you need. The first night you can either stay in a tent or stay in a hotel. They feed you and the next day you make your way into Seattle. The weather was a challenge last year, the wind and the rainstorm, but the riders just kept plugging along.

The ride might bring some challenges, but it’s symbolic of life itself and cancer, too. Life can throw curve balls at you so you just need to be prepared and ready to persevere. These days, you hear more and more about success stories related with cancer, whether it’s through social media or good ol’ fashioned word of mouth. Events like these, and blogs such as yours, it all spreads awareness. There are treatments out there and it’s because of these fundraisers that there are more treatments and more trials people can explore. There’s types of cancers that just don’t have the same research and awareness. Events such as this provide extra support online through social media and through all the events that go along with it.

Nick Rutledge is a young hockey player from our club, his slogan is that he’s going to kick cancer’s ass. It’s a scary disease, but here’s a brave young man determined to do something about it.

So let’s all try to help him out.

I have used the multiple services provided by Perimeter Limited on 6 different occasions. I recommend them to all my clients. Fantastic same day service every time I need them. I look forward to doing business with them in the future.