Save Money in the Summer: Water Harvesting 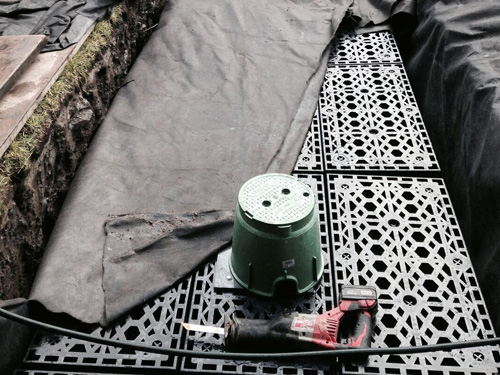 For the past few months we’ve been talking about the pros and cons of water flow in and around your house. 2015 was the year of the dry basement for the team here at Perimeter, and we bundled up our tips and advice so you could avoid the gigantic financial headaches that accompany water-damaged basements, cracked foundations and backed-up storm systems.

If water was being transported away from your house in the first three months of the wet lower mainland winter, then we were happy.

But now, instead of banishing that water away from your home into your municipal drainage system, we want you to hold onto it.

What is Water Harvesting?

A typical harvest experienced on a farm means something is extracted, picked or collected.

Harvested water is collected, but the bounty comes to you, instead of you needing to chase it.

Water harvesting is a crucial activity in dry climates such as Australia and the middle east. In Africa, every drop of water is maximized simply so people can drink it. We’re fortunate to have a large supply of fresh drinking water here in Canada, but that doesn’t mean we need to waste it on other things.

Especially when, throughout the rest of the year, there’s plenty of water falling naturally from the sky.

In short, water harvesting is the management of storm water, the re-distribution of moisture in the atmosphere instead of drawing on municipal water supplies.

Most homes in Canada have running water flowing through a network of pipes in their region. Turn on the tap, there’s the water – we don’t think about it.

What we do think about, however, is the money we spend on our homes. We landscape our yards, pour cement for sidewalks and driveways and we grow lush green gardens that peak out over the fence like a proud pet.

But in the summer, when water is scarce, our petunias wilt and our gardens dry up. Water bans are the norm every summer in the lower mainland, so people are prevented from running their sprinklers for hours on end.

Make no mistake, we support these restrictions. There’s enough water falling from the sky right now to keep your yard green all summer. You just need to store it.

From the simplest water barrels to sophisticated systems of tanks, harvesting water now can easily save you enough of the wet stuff to outlast a two week drought in July. We typically install 1000 gallon tanks, which usually suit most average-sized yards.

Plus they’re easy and relatively cheap to install.

Larger yards can use multiple tanks and save up extra water, too, it all depends on how much you’ll use in the summer. We’ve had customers who’ve installed one tank one summer, and then another the following summer once they realized how effective they are. The best time to install tanks is during construction so you don’t have to disturb your yard, but a lot of people don’t have that luxury.

And the best part for homeowners? Your utility bill. What’s a thousand bucks in the grand scheme of things when you can save big-time on your water bill during the summer?

But the actual best part?

Well, we don’t know exactly what the future holds for the global distribution of water. We don’t know how the situation in Africa will be solved. What we do know, however, is that the smarter we are with our water usage now, the easier it will be to solve our planet’s water situation in the future.

And there’s nothing better than being part of the solution rather than part of the problem.