How to Avoid a Water Main Break Before it Happens 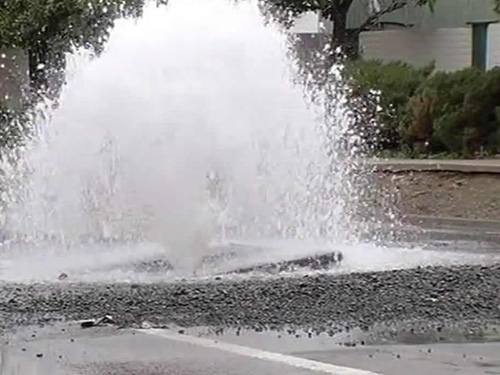 That puddle on your lawn used to be a lot smaller, didn’t it?

Oh well, it rains a lot in the lower mainland, big puddles in the grass are probably natural.

You can probably guess where this is going. Water main breaks can usually be avoided though preventative maintenance. We’ll fix ‘em, but we’d rather we didn’t have to. Noticing a large puddle or hearing water constantly running somewhere in the background in your house probably means that it’s too late already. The main is broken, and now you have to pay someone to fix it.

A sudden deluge of water such as the one the greater Vancouver area is currently experiencing won’t damage a water main on its own. It can, however, contribute to an existing problem such as:

Any of these issues can cause leaks which require a water main replacement right away before the issue gets any worse.

The easiest way to prevent a water main break? Determine the material your pipes are made of. New plastic piping is safe if you don’t spot any symptoms like the sound of rushing water, puddles or standing water. Copper piping lasts around 25 years, so if you’re getting close to that deadline then be proactive and get it replaced.

Here are a couple things to conducer with other common problematic pipes.

Lead Piping. Get them replaced. Lead piping hasn’t been used in new construction since the 1900’s, so if you have an older house and you suspect lead pipes (scratch the dull grey surface with an old butter knife, if it leaves a mark, chances are you’ve got lead pipes) then replace them.

Poly B (polybutylene) Piping. Get them replaced immediately if you haven’t already. Poly B hasn’t been used since the 90’s because it’s brittle and damage-prone. Part of the problem is that a visual check isn’t sufficient – these pipes are breaking down from the inside. If you can’t tell if your pipes are Poly B then give us a call.

Don’t wait until the puddle forms, take action now. Winter is coming and with it, water. The hot and dry summer we just experienced in combination with the wet autumn we’re having is a recipe for water main disaster.

Outside of replacing pipes, here’s what you need to do to prepare for the winter:

Disconnect all your hoses or sprinklers first to avoid any trapped water in your system. Turn off your main water valve that supplies water outside, and then turn on each faucet to drain the water sitting inside hoses or fixtures. Locate leaks and drips and either fix them by tightening the packing or replace the fixture entirely. If there’s damage then you’ll need to replace the bib. Use an insulating faucet cover throughout the winter and store hoses inside.

Corrosion, leaks and out-dated materials are an unfortunate reality of home ownership. Every house has its own challenges because of the way it was built, when it was built and who built it. If there was a manual handed out to each new resident that took care of every issue for the next half century then we’d probably see a lot less drainage issues.

But such a manual doesn’t exist as far as we know! So save yourself money, time and energy by checking your system routinely, at least every time the seasons change.