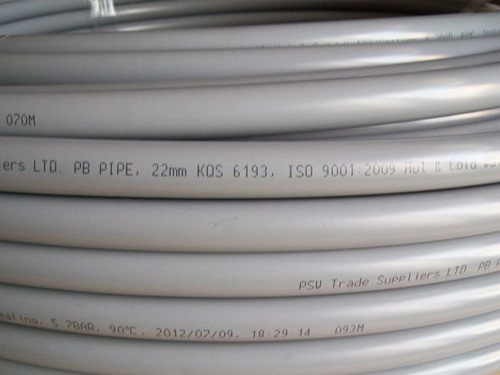 Nobody groaned when one of our neighbours walked between the front row of chairs and the chairman of the meeting to prop open one of the elementary school’s gymnasium doors. We were inching closer to 8:30, and two hours crammed into the small room seemed like 5 at that point.

Slide after slide, presentation after presentation, the plumbing committee organized by this community’s strata council had done their homework, but in the end all the evidence would boil down to a simple vote for the homeowners.

Yes, or no. Replace the poly B pipes or don’t.

Poly B is an outdated piping material that was installed in homes built in the early 1980’s to save on construction costs. At the time it seemed like a perfectly viable alternative to water service lines, but if those contractors could see the future, they’d know it was a bad idea.

Not only did the plastic connectors and elbows crack and break relatively shortly after installation, poly B deteriorates over time when exposed to:

Poly B has also been known to deliver oxidized water to hot water tanks and boilers, drastically shortening their life spans. Read more about poly B issues.

It Has To Happen

And so it was that a community of condo owners was summoned to a special general meeting. Replacing the poly B in the complex in question is a large job. Over 125 units of different sizes separated by winding streets and green spaces requires some precision and planning from the successful bidder. It’s not as simple as locating the existing piping either, as there are no original schematics indicating the precise location of the pipes. New lines need to be installed to simply bypass the poly B system.

Disruption to parking, streets and surrounding green spaces will occur. And it won’t be cheap.

For most people at the meeting, the price tag pushes over $8,000 spread out over eight months. It’s not insignificant, however, it’s small compared with some situations that required modifications costing in excess of 20,000 for a single home-owner. (These examples were cited at the meeting.)

The poly B piping beneath our feet is eroding, and if it hasn’t yet, a leak is going to spring, it’s just a matter of time.

For many people, the risk of leaks is something they’re willing to live with. After all, it’s only happened a handful of times in this complex in the last year.

However, according to Perimeter boss Chris Gray, the frequency with which leaks occur are going to increase as the poly B ages.

One person at the meeting who recently moved into the complex said she successfully negotiated a better price on her home because of the shadow of pipes destined to fail. It knocked several thousand dollars off the purchase price of her home. So, good for people moving in, bad for people wishing to sell.

So for anyone at the meeting wishing to sell in the future, getting ahead of this problem was a necessity.

The opened doors allowed a waft of cool mountain air to float through the room. People visibly relaxed. It was as if the room had been punctured, but the resulting leak that sprung was welcome, as everyone understood what needed to be done. The vote passed nearly unanimously to move ahead with the project, which was such a relief that applause rang through the gymnasium for the plumbing committee.

This is just one unique example of a community coming together to make an expensive decision to preserve their homes and future selling prospects. Details in these cases always vary, but in the end, the basic decision remains the same.

Gamble and wait for something to break, or be proactive and fix the problem before it happens?

What would you decide?